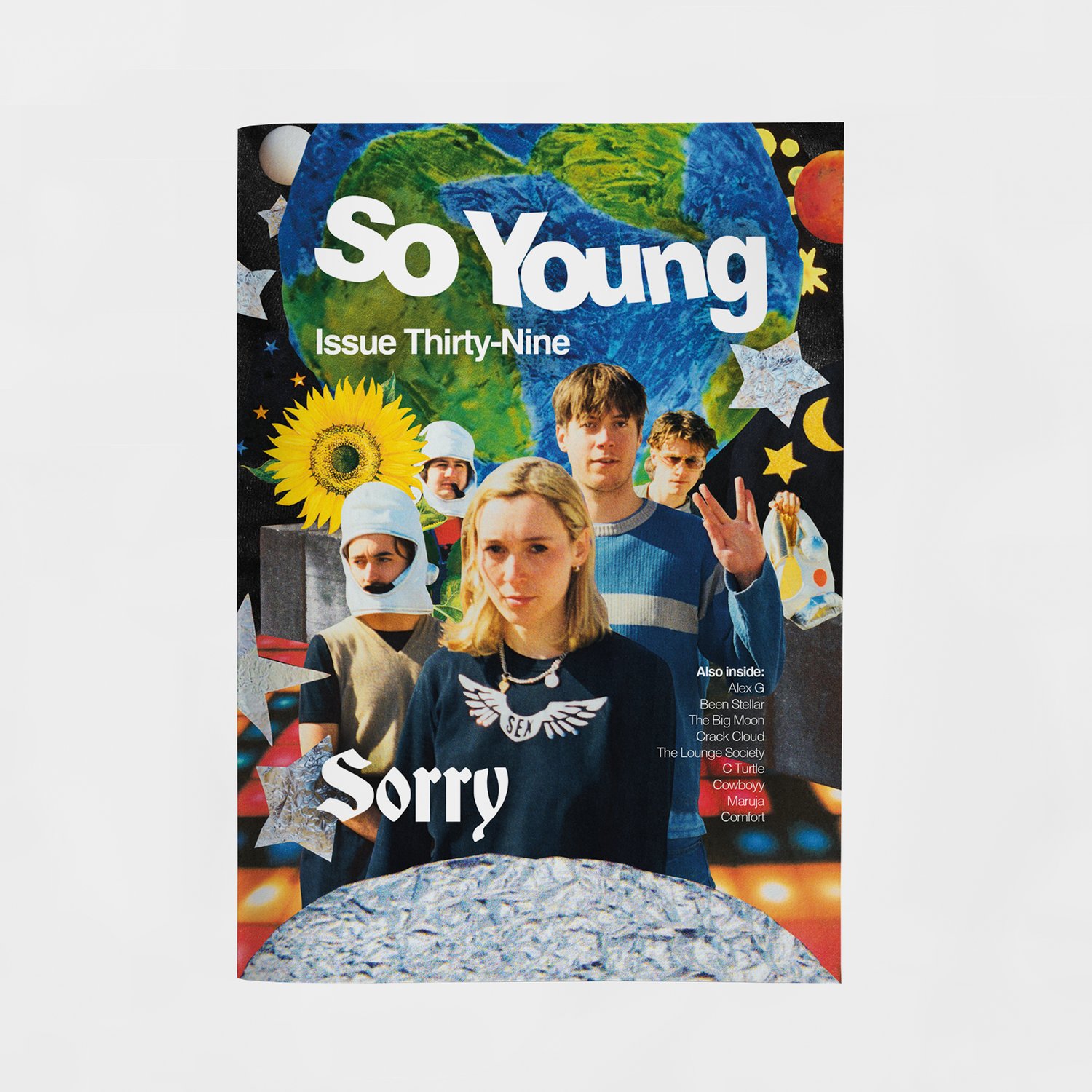 This issue of So Young is released in the centre of festival season - a period where new releases have become more sporadic, and bands are more focused on unfolding and refolding their pop up tents. Is it possible? One band making the most of the ‘quiet’ Summer period is Sorry. The London group had their debut album touring plans ground to a halt by the pandemic and they’ll be looking to make up for that around the release of new record, ‘Anywhere But Here’. In our most open conversation with the band to date, Asha voices frustration with social media, hollow culture and shares a passion for Film - even if it is shittier than it used to be.

Following a lockdown period of self re-discovery, Crack Cloud have been touring for the last three months. As the Vancouver collective gear up for the release of new album, ‘Tough Baby’, vocalist/drummer, Zach Choy took our call to dig deep into the philosophy that surrounds the album. Really deep. ‘God Save the Animals’ is the upcoming album from Alex G and for this new record he’s let more people in. We jumped on Zoom to gain a tighter grasp on what’s changed, the influence of faith and how previous releases can play as uncomfortably as reading an old journal.

Back in the UK, The Big Moon are another band whose album was stopped in its tracks over the lockdown period. Not ones to dwell, they’re back with another, titled ‘Here Is Everything’ and we spoke to Jules and Celia about the baby/band balance and jamming with Courtney Love over Zoom. Hebden Bridge is home to proud Northern band, The Lounge Society. Via Speedy underground, the four piece are readying themselves to release their debut album, ‘Tired of Liberty’. We touch base to chat being political without the need for statements, and finding the balance between capturing the live essence and meticulous production.

Staying in the North, we are getting excited about the new Manchester band, Maruja. Fusing punk with jazz, the band’s releases to date have been snippets of hour-long jam sessions - giving us the best bits, or at least their favourite bits at that moment. Full of confidence that good things are ahead, the band share their comfort with temporary side hustles and pour water on the myth of a Manchester music scene.

New York is home to Been Stellar, however they’ve spent a good chunk of the last few months in the UK and Europe. In the lead up to the release of their debut EP, the five piece have sold out shows in London and caused a riot at Paris’ Supersonic. With the foundations now laid, we dig into the ‘real’ New York that their self-titled EP references so heavily.

The final interviews in this issue split the UK in two. In Glasgow, we welcome Comfort back to our pages. Newly signed to Fat Cat Records, with whom they’ll be releasing an EP in August, the two piece touch on the integrity of AI Tools, the industry opportunity gap between London and home, plus the likelihood of Ed Sheeran being a landlord. On the South Coast, we introduce Cowboyy who are about to share their debut sounds with Nice Swan, and London’s C Turtle who we’ve been playing on repeat since hearing ‘This is Not Karate’.

We are excited to partner with the Arts University Bournemouth for our third annual GradList feature and to show off some of 2022’s graduates from the Illustration course in print for the first time.

As well as linking up with AUB, we’ve also selected some of our favourite Illustration graduates from various courses. These are scattered throughout the magazine. Look out for the ‘Selects’ sticker. 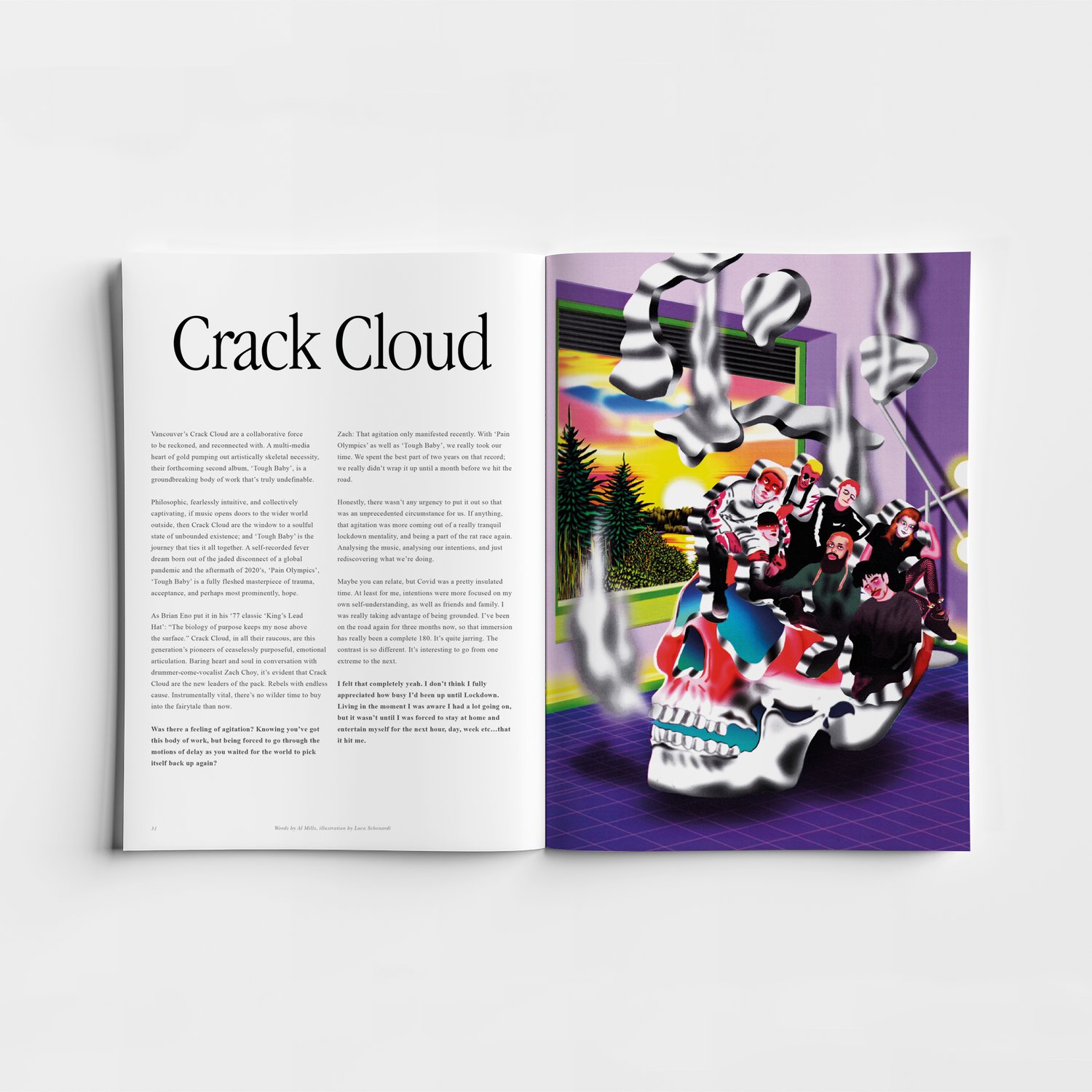